Click here to edit the Social Media Links settings. This text will not be visible on the front end.

by John and Tracey Tindall

What do you think of when you hear the words St. Patrick’s Day? Likely the words green, beer, and parades come to mind. There’s actually a full history behind that holiday and St. Patrick himself, with lots of interesting facts. 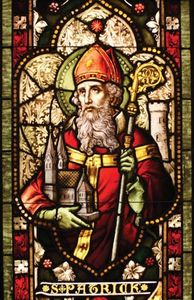 St. Patrick’s day celebrates Roman Catholic Patron Saint of Ireland, St. Patrick. He wasn’t born in Ireland, but rather Britain. When he was 16 he was taken captive to Ireland as a slave. He escaped and fled to a monastery in France.  Years later he went back to Ireland to convert the Irish to Christianity. Although the religion had already taken hold in the country, he helped it become more widespread. By the time he died, he had created many monasteries, schools and churches. The day of his death, March 17th, has become what we know and celebrate today – St. Patrick’s Day.

The celebration of St. Patrick’s Day started in Ireland. After the Irish immigrants moved to the United States, the celebration really took off with the parades and celebrations that we know today. Both the Irish and the non-Irish participate in the widespread holiday.

The Shamrock was used by St. Patrick to explain the Trinity and is also Ireland’s national flower/emblem.

Although the color green is now the common color of the holiday, it was not the original one. Blue was traditionally associated with the holiday. It switched because of Ireland’s nickname “The Emerald Isle”, the shamrock and the green in the Irish flag.

Beer is the mostly widely consumed beverage on St. Patrick’s Day (Big Surprise!), with Guinness being the most popular.

According to a census in 2016, 32.3 million U.S. residence had Irish ancestry which is 7 times the population of Ireland.

CDA Firefighter’s Pipes and Drums Pub Crawl– It is on March 16th and starts at 3:00 and goes on till 10:30. We have a schedule posted on our Facebook Profile so you can join in the shenanigans. Or… if you prefer. ↓↓↓

Related Articles
Our Events! Super Bowl 2021 ARE YOU READY FOR SOME FOOTBALL?!?!?!?! We are! The most showcased NFL game of the year is just around the corner. However you chose to watch and celebrate, you’ll want to be prepared. Check out the details of the game, ways to celebrate & some recipes to try below.   Game Details If you are […]
Helpful Tips North Idaho Winter Driving Here in beautiful North Idaho we are lucky to have 4 very distinct seasons. Everybody loves the warmth of Summer, the freshness of Spring, the colors of Fall, and the coziness of Winter. With winter comes SNOW and that can mean snowstorms!  Driving in the snow and knowing how to be prepared for winter driving […]
Costs and Spending Which Type Of Home Is Right For You? Deciding which type of home is best for you – house, condominium, townhouse or apartment – can be a struggle. Each type has its own benefits and drawbacks, it all depends on your life and specific circumstances. But it’s best to know the differences and how it will align with your life before making the […]